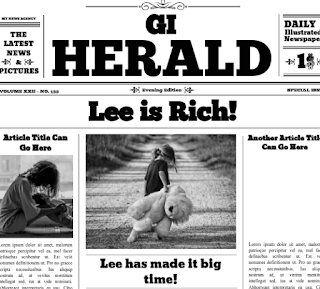 Lee used to be poor, but his uncle found him a job as a maid. Then Lee's manager kept getting angry with him and telling him to clean more. But then, Lee said he quit so he could make his own cleaning company.

Lee had a small cleaning company, then he printed out papers that said 'if you are looking for a job come to Lee's cleaning company!' So then some people started getting a job at Lee's company.

Then more and more people started cleaning for Lee. He became a billionaire!
Two years later he saw his manager and the manager said 'hi Lee' and is that your car? Lee said yes, I just bought it (it was a Lamborghini). Lee's manager was shocked. Lee drove to his uncles to give him some money.
Posted by Lee at 10:37

Kia ora, greetings my name is Lee. I am a year 7 and my teachers are Mrs Stone, Mrs Tele'a, Mrs Ilaoa, Mrs Moala, Ms Tapuke and Whaea Kelly. My favourite thing to do is writing because it is fun and cool. My favourite sport is rugby because I can score tries and step some people. I am 11 years old and I play fortnite on ps4. I hope you enjoy reading my blog please leave me a positive comment!

Who is visiting this blog?